I was invited to run an art week for the whole school and planned each session to feature a different artist.
All the children made some interesting paintings, drawings, prints and mosaics for the schools art display

Year six looked at a range of shells and made some careful drawings using art pencils. This was a great warm up for the next painting and oil pastel workshop on the portraits of Pablo Picasso.

I gave year 5 a lesson on one point perspective and they drew some examples before they looked at the unusual work of M C Escher and made some wonderful drawings around the handouts I provided them.

They then used quick print foam to draw  and score the images to print from and made some lovely prints after mixing and choosing different colours.

The children loved making amazing lizard tiles using a verity of different mosaic shapes including some wonderful gem stones to make lively lizards based on the iguanas by Antoni Gaudi in Barcelona.

After looking at lots of photocopies of the work of Kandinsky Year 4 experiment with wax and oil resists to make some interesting work. They used water colour paint and Indian ink to good effect, a great time was had by all including the class teacher who enjoyed making her own painting.

The children looked at the pointillist paintings of Seurat and then had a go at drawing some owls and bears in a pointillist style. The displays shows how successful they were. 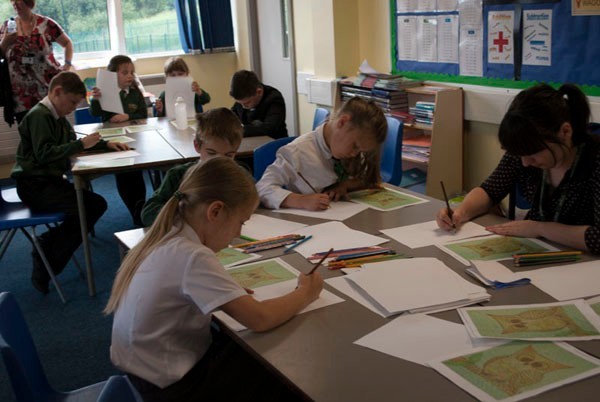 This summer term the children of Hellifiled Primary school made a four seasons mural to go on their playground fence.

All the years including reception joined in to create these beautiful landscapes.

Year five and six made drawings  and designs of British wildlife including Hares, foxes, owls and much more to put in the seasonal landscapes.

The Mural was completed over a number of days with each year painting in groups to make the colourful scenes.

After visiting the school and measuring up the area to be painted and my initial discussions with the head teacher I found out what she would like to achieve and we agreed the amount of days I could come into school to complete the work. They were five sessions, this included three mornings and a full day.

After this I ordered the marine ply and arranged for it to arrive just prior to the beginning of the project. Then I emailed her some scale drawings to show what the finished mural would look like and gave the school an order from the YPO catalogue for all the materials we would need to complete it.

The head teacher arranged to have the boards sanded and painted with some of the undercoat that had arrived from YPO.

We agreed that the whole school would be part of the process and that all the children would have a chance to paint on the boards.

On the first day which was a beautiful sunny day all the children took part as can be seen from these photos. They all had a wonderful time and were able to paint according to their ability. The only problem was getting them to go back into school to let the next group come and paint. 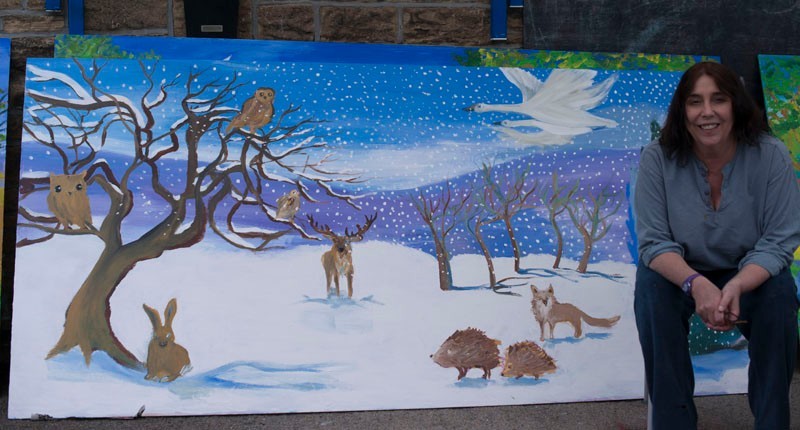 'The murals look really great finished, such a lot of hard work has gone into these paintings & the children have really enjoyed the project.' - Sara Binns, Headteacher

The afterschool club ran for children in Year 1, 2 and 3, who had been identified as particuarly talented in art. The children made observational sketches and then did watercolour paintings.

We use necessary cookies to make our site work. We'd also like to set optional analytics cookies to help us improve it. We won't set optional cookies unless you enable them. Using this tool will set a cookie on your device to remember your preferences.

Necessary cookies enable core functionality such as security, network management, and accessibility. You may disable these by changing your browser settings, but this may affect how the website functions.